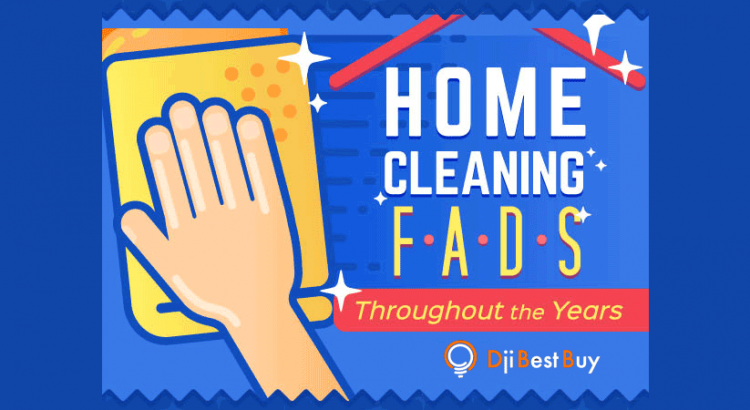 Historically, the masses had a hard and uneasy life. But the wealthy ones had a different and better life. The lady of the house was not expected to wash and iron, clean floors and carry out other chores required to keep a home clean.

Thus, they hire servants to do the works. During the world war in 1914, two and a quarter people were in service, many of whom were women.  As time went by, women over took the works done by men who had taken up arms.

All these seem like a problem that did not seem to end soon, this prompted the need for a creative thinking and new ideas. Hence, this led to the invention of various machines to keep the home clean and make life easier.Just check the infographic introducing the Home cleaning fads throughout the year.

Evolution in home cleaning with time; in 1931, the Scott Paper Company introduced paper towel rolls for kitchen, to be used to keep the kitchen cleaner than the other means used before.

This was not comfortable enough, in 1937, technology advanced and the first washing machines were created, and they got advanced in the year 1953 and more of it were sold. The invention still continued, in the year 1956 comet cleaner were advertised by the then black-and-white TV commercials brought the product ‘mainstream’.

They had the first market share in the US abrasive and tile cleaner segment with 39%. 1963, self-cleaning ovens were created and GE engineers were granted up to 100 different patents. They show electric ranges in classic yellow color.

In the 1970s through the 1980s, dishwashers were brought into use. They were initially freestanding devices, report shows that a Kenmore that was sold for $280 would be sold for $1046 today. Also in the 1970s, vacuum cleaners came into use and Avocado green was very popular that even vacuum came in color.

Many products were released in the 1990s and we are going to talk about some. In 1990, miracle mop were used, and it was developed by JOY MANGANO due to her frustration with ordinary mops. She only sold few thousands in the first year, her sales improved in 1992 when she sold 18000 mops in 30 minutes.  And sells $10 million annually in the year 2000. Febreze came to use in the mid-90s, but were not so successful, they became very successful in the year 1998 and made sales of $230 million in 1999.

Swifter got launched in the year 1999 and it has a very creative idea that ked to its invention, during research coffee was spilled on the ground when they visited an elderly woman, when she tried to clean it with a damp towel and not mop, the idea was born. They made $100 million in the first month and currently make $500 million annually. Oxiclean made the first appearance in 1997, but made good sales in the year 2000.

Roomba was launched in 2002 but only made 50000 in the first year, in 2017 more than 15 million units have been sold. In 2006, Shamwow! Was launched and keeps on improving till date. Green cleaning came to light in the 2010s, 30% of North Americans always seek for eco-friendly products. And Americans have spent $337 million on green cleaning products between 2007-2011.